Yesterday took place the online event BIM4Industry, where BIM methodology and its application in the industry was the protagonist.

Our colleague David Torromé from Acero Estudio and Ignacio Sabater from GDES (Grupo Dominguis Energy Services), talked about the processes carried out by Acero Estudio in all the work done with laser scanning in nuclear power plants and the creation of their respective BIM models.

On the part of GDES, Ignacio talked about how they have used the models, later converted into digital twins to reform the facilities with thermal fire protection specifically. In addition, valuing the advantages of BIM methodology in terms of risk reduction, time and costs, such as the quality and accuracy increasing of the work in general.

Furthermore, we were able to listen other very experienced specialists in BIM methodology and learn even more. Topics such as BIM in the pharmaceutical industry, BIM for manufacturing and BIM in Offsite were discussed, allowing us to considerably expand our knowledge in the area.

The event was a great success, we had a large audience very interested in learning about this important methodology in the AECO (Architecture, Engineering, Construction and Operation) sector.

If you have any questions or if you were not able to participate in the event and you are interested in industrial BIM, do not hesitate to contact us!

You can also take a look at our website, where you will find a lot of information about BIM and you can see different projects developed in Acero Estudio with this methodology.

Aerial Surveying Gets Smarter and Smarter

Surveyors and GIS professionals have very high standards when it comes to their tools and their profession. So it’s no wonder that many are turning to drones for their mapping and 3D modeling needs. Drones achieve results that meet surveying accuracy standards and compared to traditional surveying techniques, drastically reduce the time, cost and effort required.

Drone surveying is more complicated than taking a few photographs from above. It requires several crucial steps, from the preparation of ground control points, through mission planning, to the processing of capturing images with the surveying software.

Within drone surveying, one technique that has been successful in 3D modeling is the use of oblique photogrammetry, in which images are captured with several lenses that are mounted together in an array with fixed axis angles. The resulting images reveal details that are sometimes lost when capturing only vertical photographs.

Using this cutting-edge technology, surveyors have the ultimate surveying solution at their fingertips, in terms of accuracy and efficiency. Thanks to the intelligent oblique capture feature, surveyors can now capture and create 3D models of their targets more efficiently than ever before.

However, there are also disadvantages. Due to the number of lenses, the equipment can be very heavy and expensive. A heavier payload means shorter flight times and spent more time changing drone batteries, especially in large-scale surveying missions. On the other hand, if oblique photogrammetry or 3D modeling is attempted with a single camera, many flights are required, which takes significantly more time.

With the continued increase in the use of drones in surveying and construction, there is a constant need to make their use simpler and more inexpensive, in terms of time and cost. Aerial surveying has become smarter and oblique capture is one such innovation.

Why outsource a CAD service company to improve efficiency?

Nowadays, it is inconceivable to develop projects without using CAD tools. They have become a necessity to achieve good results along the design process of all kinds of projects.

Deficiencies that arise due to insufficient knowledge of this methodology can be overcome with the help of professional external services. If your company has the concept about what it wants to represent in a project, the participation of a specialized company will provide greater efficiency, excellence and results in the preparation of the needed documentation, reaching very high levels of productivity, positioning you ahead of your competitors.

The external support of a CAD services company not only helps you by providing you with high quality project documentation, but also helps you to optimize your time thanks to the expertise.

Building Information Modeling Conference aims to bring together leading academic scientists and researchers to share their experiences and research results on BIM methodology.

This conference provides a premier interdisciplinary platform for both researchers and educators, to present and discuss the latest innovations, trends and concerns, as well as practical challenges encountered and solutions adopted in all fields of this methodology.

Moreover, if you want to learn more about BIM, you will find all the necessary information on our website.

This means of data capture is transforming work methods and simplifying all processes as it offers great advantages derived from its use.

In Acero Estudio we are specialized in the scanning and modeling of railroad lines, industrial plants and others…

You may be wondering: What kind of projects are suitable for 3D laser scanning?

For almost all projects, 3D laser scanning can be used although, for certain projects, either because of its simplicity in measurement or because they require many changes of scanner position, it may not be the best option. However, if you work with topographic or engineering survey projects, the 3D laser scanner is your best ally.

There are many reasons that make topography and drones a perfect combination.

The applications of drones in topography are many and quite different, but among its most common uses, the supervision of works and facilities stands out from the rest, in which Acero Estudio has a lot of experience.

The study of an area for a future action, mainly large public and civil constructions, is crucial in order to examine in detail the environment in which it will be developed. Drones allow to make revisions and visually detect possible conditioning factors in the subsequent execution, in a fast way and with a high level of accuracy.

In addition, drones in this field allow us to obtain high quality images and videos that helps facilitate the presentation and analysis of the progress of the constructions.

The rail transport system plays a crucial role in cities, allowing both the orderly growth of the urban planning and the movement of millions of people and goods in a sustainable way.

The development of rail projects requires large investments and long, particularly laborious, processes, so the integration of new technologies from the initial stages is essential.

Among the most significant difficulties are the massive processing of information data, long execution periods and the complexity of construction due to the surrounding work environment. The needs of the sector have given rise to the search for optimal answers to improve the efficiency of construction and operation of project development, as well as to guarantee its progress, safety and quality. The Building Information Modeling (BIM) methodology is used to meet these specific needs.

The application of BIM in the railway sector offers comprehensive project management and the opportunity to win at all stages of its life cycle. It meets customer demand with information models created in a common data environment that enables effective collaboration and communication between all stakeholders. Accordingly, the development of the technological foundations makes it possible to explore the pre-construction of infrastructure through simulations, to assess its feasibility.

BIM is a key player in the industry. In the long term, its contributions are immeasurable and promise greater benefits in the operation and maintenance phases. BIM methodology is currently being used in 21 rail projects in 17 countries.

In the nuclear power plants : Vandellós II, Almaráz and Cofrentes, under the direction, coordination and management of GDES (Grupo Dominguis Energy Services), our team has been in charge of the data collection of existing electrical conduits and the three-dimensional modeling. Because of our commitment to excellence in safety and reliability and of course our large track record  in such industry, our client has opted for our Laser Scanning and Building Information Modeling (BIM) services.

Scan-to-BIM and its benefits

The Faro Focus 3D x330 scanner was the tool used to perform the surveys of the electrical ducts and collect all essential information with point clouds and volumes of high quality images. From the data obtained, with the use of BIM and Revit, three-dimensional models of the current state were created, to subsequently include the designed endothermic protection solutions (fire protection) and obtain their measurements with high precision.

The Laser Scanner has simplified the data collection process, getting a significant reduction in the risks involved when we work at heights, accidental actions with the equipment necessary for manual data collection and exposure times of personnel; translating in terms of occupational safety and nuclear safety.

The benefits of the use of these technologies are transcendent, in addition to obtaining accurate and structured data, it offers the opportunity to provide optimized solutions, which contemplate a greater number of data and factors for the design.In turn, it is possible to better plan actions, increase safety, avoid future problems and, consequently, increase the efficiency of nuclear power facilities.

We would like to thank our client GDES for the trust in our team.

From now, you already have available our new online tool.

This will make it easier for you to contract any of our services in a fast, simple and safe way.

Nobody better than you to know exactly what you need, don’t miss it!

On Tuesday, the 30th of March, we had the pleasure to share with Vestel Ingineering our knowledge and experience working with 3D Laser Scanner and drone technology.

With the help of Juan Antonio Ortiz Rodríguez and David Torromé Belda, we showed the different advantages of both technologies and the importance of having a drone and thermographic camera in data collection. 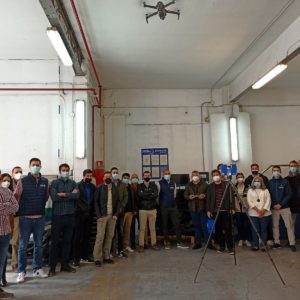 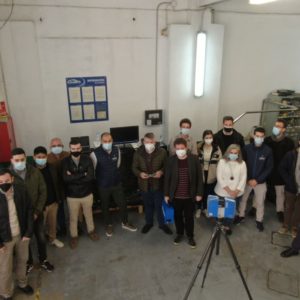 We would like to thank David Mora Negrete and Ricard Martínez Pla, among others, for their great welcome. It was a very interesting day and, most importantly, with an audience very interested in the content!

Given the special circumstances, the event was carried out respecting all security measures. The training was carried out in shifts and in a place with enough space to carry out the activity with the peacefulness that we all need during these times.

If you are also interested in training and would like to learn more about these innovative technologies in the industry, take a look at 3-D Laser Scanner and Drones.

By continuing to use this site, you agree to the use of cookies. More info